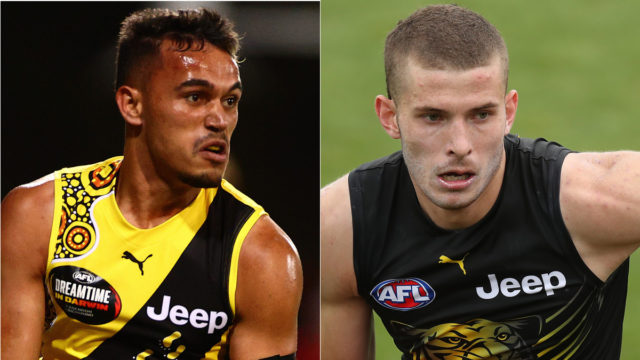 Two Richmond players have been arrested after being involved in a fight outside a Gold Coast strip club.

The AFL is investigating the COVID-19 protocol breaches after Sydney Stack and Callum Coleman-Jones were involved in the scuffle early Friday morning.

Queensland Police say two men were arrested after an altercation in Surfers Paradise about 3.30am.

“Both men sustained facial injuries as a result of the incident,” a police statement said.

“The men were both issued with a Police Banning Notice, excluding them from Gold Coast Safe Night Precincts and a Penalty Infringement Notice (PIN) for Public Nuisance (Violent Behaviour).

“Further investigations are continuing into the matter.”

An AFL spokesperson said the league was “aware of the matter and currently investigating”.

In a club statement, Richmond said it reported the players’ COVID-19 breach to the AFL.

“Richmond has become aware of a breach of AFL COVID-19 protocol by two of its players in the early hours of Friday morning,” the club’s statement said.

“The club immediately reported the breach of protocols to the AFL and is working with the league to investigate the matter.

“The players have been based inside the club’s player hub on the Gold Coast having already undertaken a 14-day quarantine in July.”

Stack and Coleman-Jones are not part of a separate quarantine hub where AFL officials, and some players and family members, were undertaking the required 14-day quarantine period.

Richmond will likely be fined, with the players almost certainly banned for the rest of the season.

Sydney Swans player Elijah Taylor was suspended for breaching protocols in Perth in July, with the Swans fined $50,000, half of which was suspended.

It is Richmond’s second COVID breach of the season after captain Trent Cotchin’s wife broke biosecurity protocols by travelling to a day spa on the Gold Coast in July.

AFL players from multiple clubs are living under strict protocols in Queensland bubbles to complete the 2020 season.

The majority of them have been temporarily relocated from Victoria.

The incident comes just two days after the AFL announced the 2020 grand final will be held in Brisbane, to be played on October 24.