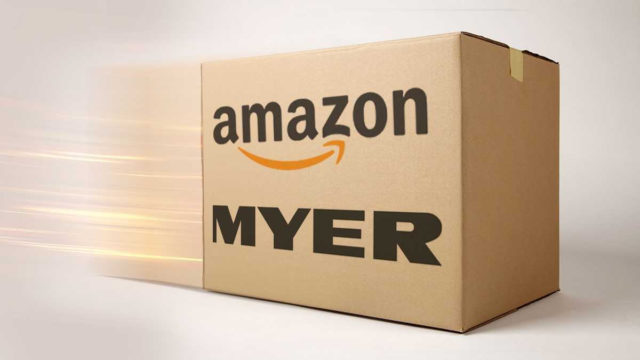 As Australia Post struggles to meet booming pandemic delivery demand, Amazon and Myer are preparing to capitalise on the online shopping boom.

Jeff Bezos-owned Amazon is poised to become the equivalent of a post office for Myer in a major delivery partnership announced on Thursday.

Australia Post commands about 82 per cent of the nation’s eCommerce delivery market, but it is weakening under the unprecedented demand for parcel deliveries brought on by the coronavirus pandemic.

Myer and Amazon will launch a joint parcel collection network for their customers, with “Amazon Hub” parcel pickup points to open at selected stores alongside Myer’s existing click-and-collect service.

There’s already plans for expansion into regional stores in the lead up to Christmas.

Australia Post has warned of delays before Father’s Day, and customers are currently facing wait times of up to two weeks for some interstate parcel deliveries.

With demand for parcel deliveries up 186 per cent in locked-down Victoria, Australia Post has called on staff to take on extra delivery shifts to help clear a backlog of parcels.

The posties’ union has criticised the firm for “refusing to fill” hundreds of vacancies across the nation despite posting huge profits in the 2019-20 financial year.

“The backlog exists because posties can simply not catch up,” CEPU Communications Union president Shane Murphy said on Wednesday.

Despite pandemic delivery delays, “the fact remains that Australia Post occupies ‘top of mind’ for consumers as the preeminent delivery solution in Australia,” said Louise Grimmer, a senior lecturer in marketing at the Tasmanian School of Business and Economics.

“The brand has ‘brand heritage’ – that is, the brand has longevity and track record and high brand recognition,” Dr Grimmer explained.

Australia Post’s “logistics capability, networks and staff” make it “very difficult for a major competitor to enter the market”, she said.

“While there are opportunities for new delivery businesses, I think it’s unlikely that Australia Post faces significant competition from other operators,” Dr Grimmer said.

Australia Post is currently transitioning letters to parcels “as being the major focus of the business”, and its “strategic competitive advantage” lies in “its ability to get to every single address in the entire country”, said Curtin University associate professor of supply chain and networks Paul Alexander.

“No one else can really do that at that level,” he said.

Companies including Amazon take advantage of Australia Post’s network by using the firm for “the last leg” of deliveries.

“Because post has to have a network that’s completely national it can do the urban deliveries quite efficiently, but the distance ones cost it money,” Dr Alexander said.

“So couriers would potentially see an advantage in moving in and picking up the urban areas, and would be under no obligation to do things that just didn’t want to do give it a price to do.”

“It depends on whether other companies think they can do it faster and or better,” Dr Alexander said.

“If Australia Post starts to become unreliable, and seen to be unreliable with parcel delivery that’s a very real risk and others will see the opportunity.”

Is the Amazon and Myer deal a ‘win-win’?

The partnership between the iconic Australian department store and the online retail predator “combines the benefits of both the online and offline retail platforms” and will “strengthen and bridge online and bricks-and-mortar shopping experiences”, the firms said.

Amazon Hub launched in Australia in late 2019, and the Myer deal means online shoppers will be able to shop the millions of items available on amazon.com.au and collect them from the 21 selected Myer stores, as well as existing Amazon Hub locations.

“It’s solution-led thinking for time-poor customers who can access Myer’s great range of services and brands that we believe Amazon customers will take advantage of when collecting their parcel,” Myer’s chief customer officer Geoff Ikin said.

“So for the customer, for Myer and for Amazon it’s a win-win scenario.”

Amazon Australia’s director of operations Craig Fuller said the deal would provide “customers around Australia with new and alternative delivery locations for their orders”.

The deal is “fantastic” for Amazon because “it means they don’t have to deliver to the door. They can. They can deliver a great chunk of stuff to particular locations in this case Myer,” Dr Alexander said.

However, the partnership could prove disappointing for Myer.

“I’m not convinced this is a partnership with a great deal of positives for Myer,” Dr Grimmer said.

“There are limited numbers of stores around the country for pickup and for many people it’s not actually that convenient.

“I just don’t see that many shoppers thinking they’ll do some department store shopping while picking up their Amazon order.”

The post Amazon and Myer team up on parcel pickup as Australia Post’s delivery delays continue appeared first on The New Daily.