Some Australians and permanent residents stuck overseas during the coronavirus crisis have described a new loan scheme to help those struggling financially as “useless”, a “cruel joke” and “political bulls***t”.

The federal government earlier this week announced Australians stuck abroad in financial hardship can access one-off loans of between $2,000 and $5,000 to help them with emergency living costs or flights home.

There are strict eligibility criteria involved and people will have to prove they’re in genuine need of the loans, including providing evidence they can’t get funds from family or friends, banks or insurance companies.

If the loan is not repaid within six months the government could cancel their passport.

Psychologist Sandi James, who is stuck in London, said the loans were a “joke” and “political bulls***t” because “hardly anyone” could access them.

“It’s a waste of time,” she told SBS News, adding she wouldn’t know if she would be able to repay it within the six-month limit, potentially risking her passport.

Ms James found herself in the UK after Malaysia, where she was due to start a new job, closed its borders in March.

She’s had two flights back to Australia cancelled.

”I’ve lost a lot of weight, I’m crying all the time. I don’t know what to do. I have nothing, there is no access to anything (here).”

Ms James said the Australian High Commission in the UK told her to call British charities to source food parcels.

For now, she says she’s managed to secure a job that keeps her, and her partner who is jobless and also stuck in Thailand, barely afloat.

Ruth Malik with her children

The Department of Foreign Affairs and Trade has said the loan scheme would help the “most vulnerable Australian citizens overseas”.

“This support is intended to assist Australians in financial distress due to COVID-19 to purchase return flights to Australia where this is possible, including where prices have increased, or to shelter in place while they await an available flight to Australia.

“The emergency loans are only available as a last-resort. Applicants will have to meet strict eligibility criteria and must be intending to return to Australia as soon as a flight is available.

“Where commercial flights are not available, we continue to work with airlines and other governments to help Australians find ways to get home.”

Ruth Malik, who is stuck in India and hasn’t seen her two teenage children in Australia for five months, says the loans are “useless” and the real problem is the cap of people per week permitted to enter Australia, which is currently 4,000.

Ms Malik’s 75-year-old mother is looking after her children. But with her brother in hospital with terminal cancer, the situation is taking a toll on the family.

“I’m terrified and I need to go home,” she said.

Chetan Shah, who is also stuck in India after making a last-minute dash to see his dying mother in March, said there were thousands of permanent residents like him who won’t even be able to qualify for the loans.

Only Australians citizens, or permanent residents travelling with a citizen who’s also a family member, are able to apply. 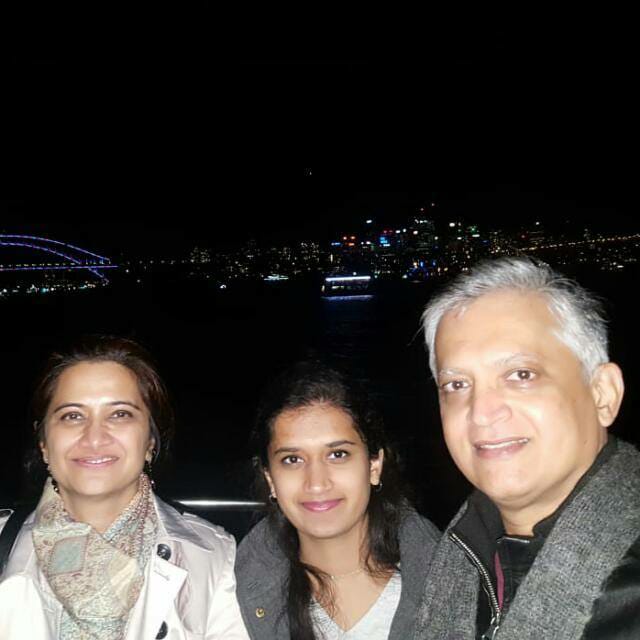 Chetan Shah in happier times with his family in Sydney.

Mr Shah said while he is okay financially and won’t apply, the loans are unlikely to genuinely help others who’ve been struggling without an income for the last six months, and who could face a total bill of up to $20,000 for hotel quarantine and flights home.

People part of help groups on social media have also voiced frustration with the loan scheme.

“It just shows they aren’t listening. If they just lifted the [arrival] cap the majority of Australians would be prevented from having financial problems,” Kylie Cardwell wrote on the ‘Bring Aussies Home’ Instagram page.

“No-one needs a loan when already maxed out. Really no understanding of what the real issues are,” Jenny Gilpin added.

“[It is] like offering a Panadol to someone you’ve just shot in the guts,” David Stephens wrote in a reply to the High Commission in the UK.

Cap on arrivals being reviewed

There are now 23,000 Australians registered with the Department of Foreign Affairs and Trade who want to return home.

Approximately 3,450 of those stranded overseas are considered vulnerable due to health or financial reasons.

However, the Board of Airline Representatives of Australia estimates the backlog of Australians seeking to get home is actually somewhere around 100,000.

If the 4,000 people per week arrival cap remains unchanged, BARA says it could take six months for the 100,000 Australians to get home.

More than 10,000 people have also signed a petition to federal parliament calling on the government to remove the cap on arrivals.

State and territory leaders are expected to discuss the issue with Prime Minister Scott Morrison at Friday’s National Cabinet meeting, though changes are unlikely to be announced.

Trade Minister Simon Birmingham on Thursday said while the cap is “constantly under review”, the limit is determined by the states and their capacity to deal with those in mandatory hotel quarantine.

Federal Labor is calling on the government to raise the cap on arrivals, restrict the ability of airlines to allegedly “price gouge” and consider more charter flights to bring back stranded Australians.

“How many flights has the Morrison government chartered for seafood? 1,800 fights,” she told the Senate on Thursday night.

“Under the Morrison government if you’re a lobster, you get a ticket on a charter flight. But if you’re an Aussie overseas during a pandemic, you get left stranded.”