Queensland on Friday agreed at national cabinet to aim to reopen its borders by Christmas, but alongside Tasmania and Western Australia declined to endorse a national agriculture code which would deem agricultural work an essential service.

NSW will work with Victoria, South Australia and the Commonwealth on the code, allowing agricultural workers to move freely between the southeastern states.

Ms Berejiklian on Friday told reporters the code was crucial for Australia’s agricultural sector after years of drought were this year succeeded by a bumper harvest.

She called on Queensland Premier Annastacia Palaszczuk to join those conversations and to consider the plight of NSW-Queensland border communities.

The two leaders have been at loggerheads over the COVID-19 border closure, which forces those coming from NSW without a valid exemption into 14 days of hotel quarantine at their own expense.

“In addition to ag workers, I’m particularly concerned about construction jobs, infrastructure jobs between the NSW-Queensland border, as well as tourism jobs obviously.

“During a pandemic you have to look at this issue from a compassionate perspective, a human perspective, and have to appreciate that people with medical challenges, with compassionate reasons or (who) just (have) to get to work need to be considered.

“We’re Australians as well as people who live in NSW.” 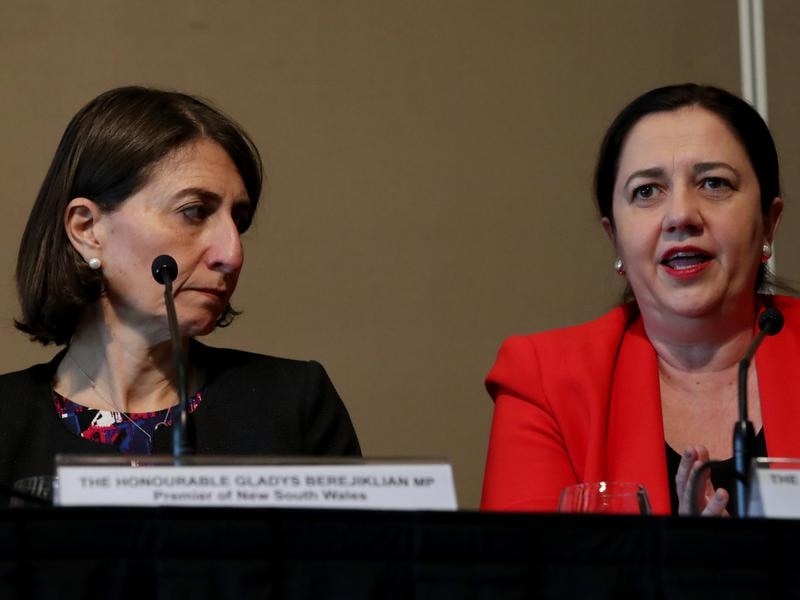 Premiers Gladys Berejiklian and Annastacia Palaszczuk are at loggerheads over the border closure imposed by Queensland.

The restrictions came under fire last week after a Ballina woman pregnant with twins lost one of the babies after being forced to fly to Sydney for the birth. The mother was told by northern NSW health officials she would have to go into quarantine under Queensland rules.

The Queensland government has declared it won’t change its border regulations until NSW passes 28 consecutive days without COVID-19 community transmission.

The NSW-Victoria border buffer zone on Friday extended from 2.5km to 50km.

Meanwhile, another Sydney school has been forced to shut after being linked to a positive COVID-19 case, while NSW has recorded eight new cases of the virus.

All staff and students at Regents Park Christian School are advised to monitor for symptoms, but those who attended after-school care on Monday and Tuesday must isolate for 14 days.

The case, which was deemed COVID-positive on Wednesday night and is linked to a previously reported infection, was one of the eight NSW cases in the 24 hours to 8pm on Thursday.

Of the eight, one case was in a traveller in hotel quarantine while three were connected to the City Tattersalls Club gym cluster and two to the St Pauls Catholic College Greystanes cluster, taking the size of those clusters to 57 and 14 respectively.

NSW Health on Thursday issued an alert for a church service at Life in the Spirit Ministry in Prestons, with anyone who attended on 30 August required to self-isolate for 14 days.

Health authorities on Friday added New Brighton Golf Club in Moorebank to that list, with patrons on the evening of 28 August deemed close contacts and told to self-isolate.

Anyone who was at the Newtown bar between 6.30pm and 9.30pm for at least one hour on 28 August must immediately get tested and isolate for 14 days.

Anyone who attended the Bondi gym on 31 August and anyone who visited the Randwick gym between 30 August and 1 September are advised to monitor for symptoms.

Contact tracers are working to identify close contacts of the cases at both gyms.

“I feel horrible about that but it’d be inappropriate for me to overrule health advice especially if, heaven forbid, the disease got into one of our aged care facilities,” Ms Berejiklian said.

There are seven COVID-19 cases in NSW currently in intensive care, with four ventilated.

News and information is available in 63 languages at https://sbs.com.au/coronavirus.

Sex, slut-shaming and Sydney schools: Why Chanel Contos is calling for education reform across Australia