House prices continue to fall ahead of market’s toughest test 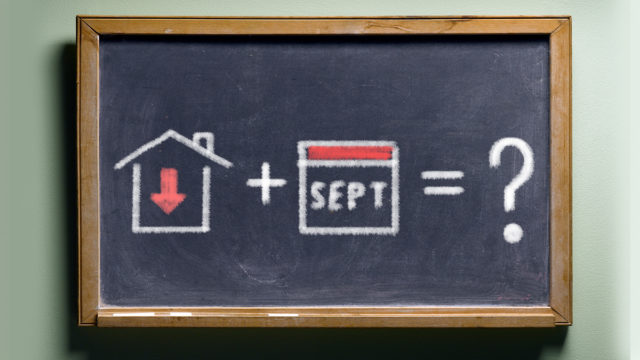 National property prices haven fallen roughly 2 per cent since the beginning of the pandemic, but analysts say the market’s toughest test is just around the corner.

Despite a majority of capital cities holding firm or recording price increases over August, the national median still fell by 0.4 per cent.

It was the fourth consecutive month of national falls in a coronavirus downturn that can largely be attributed to Melbourne.

Prices in the nation’s second-largest capital plummeted 1.2 per cent over the month as government restrictions slammed the brakes on real estate activity, with prices now down 4.6 per cent on pre-pandemic levels.

Perth and Adelaide remained stable, while Hobart, Canberra and Darwin each recorded gains of 0.1, 0.5, and 1.0 per cent respectively.

CoreLogic head of research Tim Lawless, who last month told The New Daily the December quarter would provide a clearer picture of the housing market’s health, said prices had so far held up as so few properties were on the market – meaning demand was meeting supply.

Although the level of new listings exceeded 2019 levels in July, they declined a further 11.5 per cent in August.

But Mr Lawless said prices would tumble much faster if more vendors listed their properties for sale in coming months.

“As fiscal support starts to taper at the end of September and distressed borrowers taking a repayment holiday reach their six-month check-in period around the same time … the timing of these two events could be the catalyst for a gradual rise in distressed listings,” Mr Lawless said. 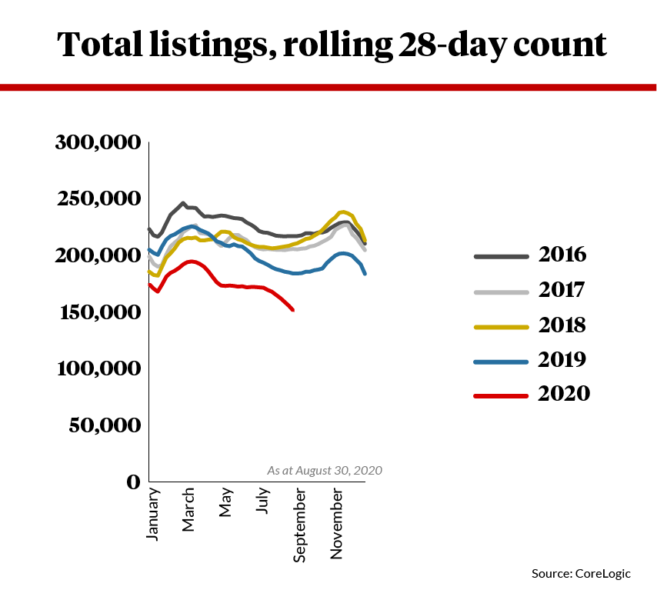 “If we do see active listing numbers rising to be higher than previous years, it could signal that vendors will need to offer up greater discounts in order to sell their home.”

That’s a train of thought shared by AMP Capital chief economist Dr Shane Oliver, who in July revised his forecast for the property market down to a peak-to-trough collapse of 10 to 15 per cent by mid-2021.

(The falls would be driven by the laggard Melbourne market, which he expects will shed up to one-fifth of its value.)

Dr Oliver said the stimulus measures – including JobKeeper, JobSeeker and repayment deferrals offered by banks – produced an “artificial market” that has protected heavily-indebted home owners who suffered heavy income losses during the pandemic.

But although he believes real estate activity in Melbourne will rebound once the city’s lockdown is lifted, high rates of effective unemployment – together with sluggish demand from overseas investors and renters – will see demand shrink relative to supply.

And that means lower prices.

“Support measures have so far helped head off a sharp collapse in prices, but the market has still weakened anyway in Melbourne and Sydney and we expect further falls as support measures start to be tapered from the December quarter,” Dr OIiver wrote in a note on Tuesday.

Canstar group executive of financial services Steve Mickenbecker told The New Daily the looming “fiscal slope” scenario should not act as a trigger for home owners to “panic sell”.

Rather, they should call their lender.

According to a recent survey conducted by the comparison site, 57 per cent of property owners have not refinanced their home loan amid an ongoing pricing war.

Comparing the average rate on the market to the lowest rate, customers with a $400,000 loan over 30 years can save more than $3000 per year on their loan by refinancing, Mr Mickenbecker said.

And although customers who have taken up mortgage holidays will struggle to find a better deal elsewhere, they can lighten the load in other ways.

“At the end of the day, you’ve got to act now to safeguard yourself when you’re in comparatively better financial shape and still in a position to negotiate with your lender or other providers,” Mr Mickenbecker said.

“If you do get a loan at a better rate, it puts you in a position to get ahead as you build in a buffer – but for some who are treading water and are in financial difficulty, your lender may be willing to offer a lower rate or the option to go interest-only.”

Despite the Reserve Bank holding rates at 0.25 per cent since March, banks have taken a knife to home loan rates in recent months.

As a result, nine lenders now offer at least one home loan product below 2 per cent interest.

The post House prices continue to fall ahead of market’s toughest test appeared first on The New Daily.