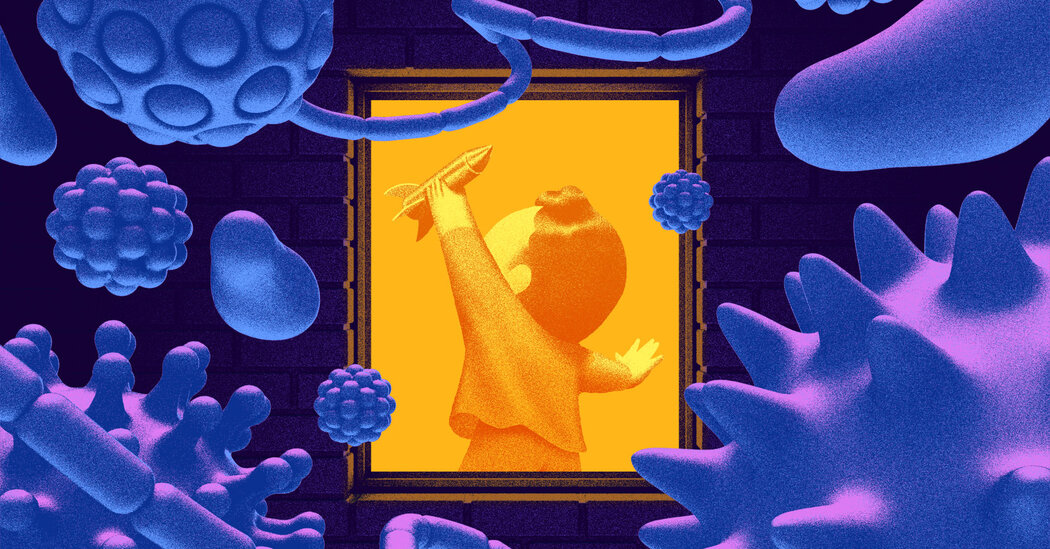 The coronavirus pandemic has come with a few silver linings. The clear winner for me has been the delightful dearth of snot: My kids haven’t had a cold since March, and neither have I, and I haven’t missed those crusty red noses one little bit.

Yet I know it can be good for kids to encounter bacteria and viruses, because microbial exposure shapes the development of the immune system. This is one of the reasons we have vaccines — when we inject our bodies with little bits of pathogens, or dead ones, they learn how to better recognize and fight these same (live) pathogens down the line.

Exposure to a wide variety of microbes early in childhood also trains kids’ immune systems to recognize what’s dangerous and what’s not. Parents are now told to feed their babies allergens like peanut butter and eggs earlier rather than later in infancy, because doing so teaches baby’s immune system, little by little, that these foods are safe.

And according to the hygiene hypothesis — a controversial theory first proposed in 1989 by an English scientist, David P. Strachan — as kids in developed countries have grown up with more bleach and disinfectant wipes and fewer infections over recent decades, rates of allergies and autoimmune diseases have increased substantially. Cleanliness and isolation, the argument goes, aren’t good for developing immunity, although some scientists aren’t convinced.

So I can’t help but wonder, even as I celebrate the lack of snot and sneezing: Is Covid-19 isolation affecting kids’ immunity? Will locking our children inside the apartment all day to protect them from one virus make them more susceptible to others — even some chronic illnesses — for the rest of their lives?

Some illnesses are better caught early, others later

First, some reassuring news: Some kids’ immune systems will benefit from having more time at home this year. Consider respiratory syncytial virus, or R.S.V., a common respiratory virus that kids typically catch before the age of 2 (often at day care). R.S.V. can be very serious, leading to some 57,000 hospitalizations in American babies and toddlers each year. R.S.V. is also believed, in rare cases, to trigger asthma, a disease sparked in part by an overactive immune response — and “the younger you are when you have R.S.V., the higher the risk,” said Tobias Kollmann, M.D., Ph.D., a pediatric infectious disease physician at the Telethon Kids Institute in Perth, Australia. So if babies who otherwise would have caught R.S.V. this year do not, that’s a win; when they eventually catch it later on (nearly all kids do), the potential risks will be lower.

Yet the opposite can be said about other infections. Cytomegalovirus (C.M.V.) and Epstein-Barr virus (E.B.V.), two common infections caused by herpes viruses, incite few serious symptoms in toddlers and young kids. But when older kids catch them, they can cause infectious mononucleosis, a debilitating illness that can last for months. In rare cases, too, kids with mono have more serious complications; their spleens can rupture, which can be fatal.

Measles, mumps and chickenpox are other infections that can be more serious when caught by older kids. But in the U.S., these infections can be prevented by vaccines.

Interestingly, too, kids who acquire C.M.V. while young may reap additional immune benefits. (In the U.S., about half the population of young adults has C.M.V.; in developing countries, the proportion is closer to 80 or 90 percent, although people rarely know whether or not they have it.) The virus persists in the body for life and, like other herpes viruses, has co-evolved with humans for many millions of years. It has “a big impact on immunity,” said Sallie Permar, M.D., Ph.D., a pediatric immunologist at the Duke University School of Medicine.

Many of C.M.V.’s genes directly shape our immune responses and expand our body’s population of certain immune cells. Research has shown that when young people have C.M.V., they have a stronger immune response to the flu vaccine, and scientists speculate that C.M.V. could strengthen the immune system’s ability to fight off other pathogens, too.

Benefits of early exposure to microbes, allergens and bugs

Infections, though, aren’t the only things to consider. When kids are around other kids, they share microbes that don’t necessarily make anyone sick, but could be good for developing immunity because they seed a more hearty ecosystem of microbes in the body, or microbiome.

In a 2015 study, researchers studied African baboons who had similar behaviors and diets and overlapping environments but who differed in one key way: One group engaged in social grooming — touching and picking things off each other — while the other did not. They found that the baboons that groomed each other had more similar microbiomes to one another, suggesting that social contact leads to meaningful microbial exchanges.

Researchers theorized in another 2015 paper that when people isolate from one another and spend their time mostly inside, it may reduce “our exposure to richer microbiomes from other sources, thereby limiting the development of our immune system.”

Another reason more exposures may be better is that when young kids are regularly exposed to small amounts of potential allergens — things like pollen, eggs, peanut butter and shrimp — it trains their bodies to handle those things well in the future.

“The idea is that, if you’re exposed to something over and over again, you become tolerant to it rather than have an overactive response,” Dr. Permar said. (Pediatricians used to tell parents the opposite: that they should wait until their babies are older to introduce allergenic foods. But clinical trials conducted in 2015 and 2016 showed that earlier exposure is, in fact, better, and the American Academy of Pediatrics has changed its recommendations.)

Other research suggests that more exposure to “good” bugs is better. Babies who receive antibiotics, which kill the microbes in their microbiome, are at a higher risk for developing asthma, eczema and allergies, while kids who grow up on farms and are, among other things, surrounded by animals harboring all sorts of microbes have a lower risk of developing these same conditions.

One unpublished 2019 experiment reported that babies who grow up on farms have more gut bacteria known to reduce inflammation. A theory known as the “old friends” hypothesis, developed in 2003 by British microbiologist Graham Rook as a replacement for the hygiene hypothesis, suggests that frequent exposure to harmless microbes that have co-evolved with humans help to train the developing immune system.

“You need that microbial exposure to really develop your immune system fully,” said B. Brett Finlay, Ph.D., a microbiologist at the University of British Columbia and co-author of “Let Them Eat Dirt: Saving Your Child from an Oversanitized World.”

“Our immune systems are built to be exposed to things early in life so we can then be ready for the rest of our life,” he added.

Does this mean that if your kids stay home all year, their immune systems will be doomed? No. Because when it comes to how the immune system develops, “there’s so many things to consider,” said Ruchi Singla, M.D., a pediatric allergist and immunologist at the University of Chicago Medicine. “Just as the immune system is so complex, all of the things that affect it are so complex.” Immunity is largely shaped by genetics, for instance, which means that what your children do or don’t do this year will only shape certain aspects of their immunity.

This is why, when researchers try to tease out how specific behaviors and choices shape immune responses, they don’t always get clear-cut answers. Dozens of studies have tried to understand the health effects of attending day care by comparing kids who go to day care with those who stay home, hoping to identify differences in rates of allergies, asthma and other immune-related conditions. Yet the studies largely conflict — if one study comes to one conclusion, another one often contradicts it. Given that immunity is shaped by so many factors, Dr. Permar said, if isolating our kids for a year or two has any effect, “it will probably be subtle.”

Families who stay home this year may also do other things to balance out the potentially bad effects of isolation. Some mothers may breastfeed their babies for longer than they otherwise would have, Dr. Finlay said, which could strengthen their immunity, since breast milk contains maternal antibodies. (This said, the evidence on how breast milk shapes immunity is also mixed.)

Families may also spend more time outside than usual, where they will be exposed to more diverse microbes. Many families adopted pets during the pandemic, too, and research suggests that pet ownership (especially dogs) reduces the risk for eczema and asthma. The upshot is that the impact of coronavirus-induced isolation is “not a one-size-fits-all,” Dr. Finlay said.

Still, if you’re concerned, there are several things you can do to give your kids’ immune systems a boost. First, make sure everyone gets a flu shot this fall, and that your kids stay up-to-date on their childhood immunizations, Dr. Singla said, because vaccines are among the best tools to train kids’ immune systems.

Send your children outside when you can. Take walks and hikes together, or just let your kids play outdoors. Not only does outdoor play expose kids to good microbes in the environment, but play also helps kids regulate stress — and stress can affect the immune system as well.

Since kids can pick up on our stress, too, perhaps the less we worry about how our kids’ isolation could affect their immunity, the better. Instead, we can enjoy the rare but precious silver linings of the pandemic — like that maybe we won’t have to buy 745 boxes of tissues this year.

Melinda Wenner Moyer is a science and health writer and the author of a forthcoming book on raising children.