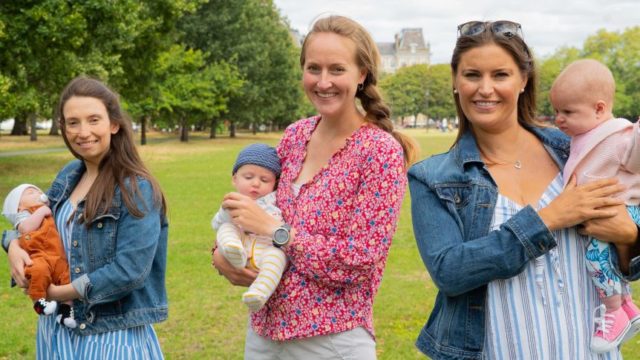 Australian Hannah McLean says going into labour during the coronavirus lockdown in the United Kingdom had its advantages.

Her son Callan arrived so quickly he had to be delivered by paramedics in her London home on the Easter weekend.

“They came very quickly because there was no traffic on the road,” she told the ABC.

But she soon discovered the downsides of the restrictions. The lockdown meant she could not see friends or family.

Worse still, her parents could not travel from Australia to meet their grandchild.

“I was thrown into depths of anxiety,” she said.

“What kind of world was I was bringing my baby into?”

As COVID-19 was taking hold around the globe, the Federal Government warned Australian travellers they should return home while airlines were still operating regular services.

But for Ms McLean, that was not an option.

“The thought of getting on a plane, I don’t think physically I could have done that as I was eight months’ pregnant,” she said.

“My partner is English, my life is here, my work is here.

“You can’t just suddenly click your fingers and go back to Australia.”

Ms McLean, who is originally from the Blue Mountains in NSW, is hoping to introduce Callan to his family soon.

However, she said strict caps on passenger arrivals in Australia had made securing a flight a “total nightmare”.

‘It’s going to be a very noisy flight’

Her baby daughter, Ailish, was also born during London’s lockdown. Ms McCrossin is desperate to introduce her to her family in Australia.

“Every day the travel restrictions are getting harder and harder,” she told the ABC.

“Every day a piece of my heart breaks off because you’re being robbed of so many incredible memories.”

So Ms McCrossin came up with a plan to get back. She is organising a special charter flight to Australia for young families with babies.

“I just thought, ‘I’ve got to try and do something about this,’” she said.

Families will be asked to self-isolate for 14 days prior to departure to reduce the risk of infection, and are being told they should expect to enter quarantine upon arrival.

More than 120 passengers have registered for the planned flight, including 70 babies.

“It’s going to be a very noisy flight,” she said.

She is now getting quotes from airlines and charter companies – something she never dreamed she would be doing as a young mother.

It is not the first time Australians have looked at chartering flights themselves to get home during the pandemic.

In April, a group of expats and aviation experts banded together to organise private charter flights to bring home hundreds of Australians stranded in India.

However, Ms McCrossin’s biggest obstacle will be getting permission to land.

“No priority is given to international passenger charter services,” a federal Department of Transport spokesman said.

London-based Australian mother Katy Boustead, who has registered for the charter flight along with her seven-week-old baby Charlie, said she hoped the Government could make room for a plane full of young families.

“This model is a way of getting Australians home in a safe manner, not risking [health] … in Australia,” she said.

“Hopefully it’s something that governments are willing to look at.”

Why is it so hard to return to Australia?

About 20,000 Australians have told the Department of Foreign Affairs and Trade (DFAT) they wish to return home.

However, Australia’s National Cabinet has imposed passenger caps on international arrivals to ease the pressure on quarantine facilities, which will remain in place until at least October 24.

Caps are currently in place at the five major international airports, as follows:

Airlines flying to Australia are each allocated a passenger allowance by the Federal Government, and it can vary by the day.

Therefore, airlines routinely block ticket-holding passengers from boarding, so they do not breach Australia’s caps.

Australian Phillip Spivey, who has been “bumped” off seven flights from London to Australia, said it was “terrible”.

“We’re not staying away because we want to, it’s because we just cannot get back,” he said.

Mr Spivey, who has borrowed money from friends to purchase additional tickets, has only recently secured a flight home via Dubai after trying for four months.

The caps are forcing some airlines to fly planes to Australia with just a few dozen passengers on board.

In order to cover their costs, they are prioritising passengers in premium cabins.

Qatar Airways, which currently operates the most flights to Australia, says it considers factors like compassionate and medical needs, connecting flights and party sizes when deciding who gets a seat.

However, a spokesman said cabin class was another factor.

“In order to ensure the continued viability of our operations to Australia, commercial value of tickets sold must also be taken into consideration to be able to operate each flight,” he said.

Emirates said a “large portion” of seats were still allocated to economy passengers in “most cases”.

United Airlines declined to specify how it allocated seats, while Cathay Pacific and Singapore Airlines did not respond to questions.

Quarantine would mean 23 hours a day in a room with a newborn
Ms McCrossin is also hoping to arrange child-friendly quarantine options if her charter flight gets off the ground.

Access to fresh air or an outdoor area is a priority for many of the parents who have registered their interest.

“The thought of being in a room for 23 hours a day with a newborn is possibly worse than prison,” Ms McLean joked.

“As much as I love my son, I think that will be a challenge for all of us.”

She said she missed her family, but many people had lost their loved ones forever.

“There’s a lot of people with a lot of stories and … we’re not anywhere near the worst affected,” she said.