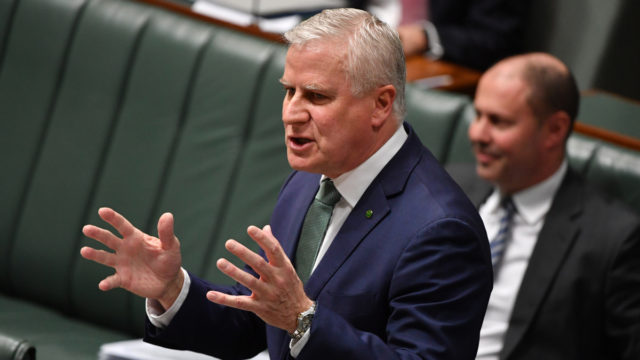 Deputy Prime Minister Michael McCormack has been forced to admit he was wrong for suggesting Victoria’s COVID-19 increase is linked to a Black Lives Matter rally held in Melbourne.

Speaking on the ABC’s Q&A program, Mr McCormack said protesters who attended the large Black Lives Matter rally held on June 6 were partly to blame for an outbreak of coronavirus cases.

Pressed on the evidence that suggested the Black Lives Matter rally contributed to Victoria’s outbreak, Mr McCormack said it had been proven there were three confirmed COVID-19 cases from the protest.

But he was quickly pulled up on the last point by host Hamish Macdonald who said “you’re drawing a link that I’m not sure is substantiated”.

Mr Macdonald later told the panel that the Department of Health and Human Services in Victoria had just confirmed there was no link between those at the protest who had COVID and the current outbreak.

Also on Monday night, Daniel Andrews was pressed on whether he would step down as Premier if the inquiry into the hotel quarantine program found he was ultimately to blame for Victoria’s second wave.

“This is about a fight with only one thing and that’s this wildly infectious virus. The politics of this, that is of no value.”

His comments came as the national death toll rose to 762 on Monday after another nine deaths in Victoria – eight of which were linked to aged care.

There were a total of 48 new cases in Australia – 41 in Victoria, four in NSW, two in Queensland and one in Western Australia.

More than 100 health workers across two Sydney hospitals are in isolation waiting to see if they have COVID-19, after a colleague caught the virus while wearing a mask.

There were four new cases in NSW on Monday, including three healthcare workers at two Sydney hospitals and a returned overseas traveller in hotel quarantine.

The three were diagnosed during investigations into an emergency department doctor reported on Saturday who worked at Sydney’s Concord Repatriation General Hospital and Liverpool Hospital while infectious.

Authorities are scrambling to determine if they contracted the virus from a contaminated object.

Another case, a visitor to a hospital emergency department where the doctor worked or sought treatment, will be included in Tuesday’s numbers, taking the cluster to five.

Authorities are concerned by the likelihood at least one of the new cases caught the virus while both parties were wearing masks.

“For some of the cases there isn’t that clear-cut direct contact without a surgical mask,” NSW chief health officer Kerry Chant told reporters on Monday.

“We are exploring avenues of whether there could be fomite transmission.

“What that means in lay terms is if your hands are contaminated, and then you’re touching computer screens or touching pens and pencils pieces of paper, can you actually transmit the virus.”

The three newly-reported health workers reported having no symptoms while at work and also wore personal protective equipment while caring for patients.

A parliamentary committee investigating Rio Tinto’s destruction of ancient cultural sites has abandoned plans to hold hearings on the land of the traditional owners because of Western Australia’s coronavirus travel restrictions.

Members of the Northern Australia committee had intended to meet on the land of the Puutu Kunti Kurrama and Pinikura (PKKP) people this month.

The decision could be revisited in the unlikely scenario WA’s restrictions, which limit arrivals and require those entering to quarantine for 14 days, are eased later this year.

Members of the committee, chaired by Coalition MP Warren Entsch, are investigating what led to one the world’s largest mining companies destroying the 46,000-year-old Juukan Gorge rock shelters earlier this year.

Rio had approval for the blast but subsequent evidence indicated traditional owners were not told the company had examined multiple options for expanding its Brockman 4 site which did not involve damaging the rock shelters.

Western Australia had one new case – a returned traveller in hotel quarantine.