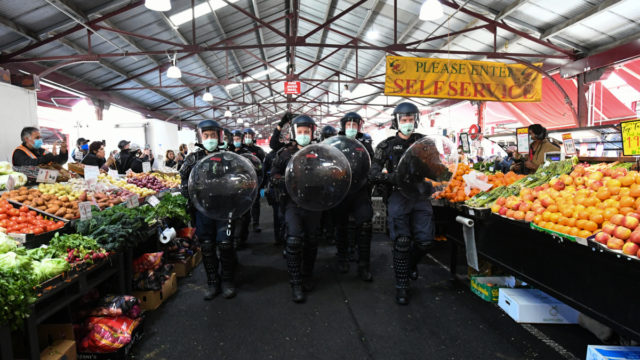 Several dozen anti-lockdown protesters have been arrested, with close to 200 others fined in what was a day of drama, lies and tough police action on the eve of Victoria’s lockdown easing.

Many were caught throwing fruit at police who flooded Queen Victoria Market on Sunday in a second day of demonstrations.

Close to 250 protesters chanting “Freedom” and “Power to the people” outnumbered more than 100 officers who raided market stalls.

Police made 74 arrests, and at least 176 people were slapped with fines for breaching the Chief Health Officer directions.

A 44-year-old Burwood East man, who police believe was a primary agitator for the protests, remains in custody and is expected to be charged with incitement.

Footage of violent scuffles as officers in riot gear pushed through the crowd in between tables of produce was posted online.

Other videos showed police on horseback attempting to break up another group.

Protesters yelled “This is not a police state” and “You’ve got to be on the right side of history”.

Victoria Police said: “It was extremely disappointing to see people not just protesting, but putting the lives of other Victorians at risk despite all the warnings”.

“Our investigations into this protest will continue, and we expect to issue further fines once the identity of individuals has been confirmed,” a spokesperson continued.

Victoria Police has defended its handling of an incident where an officer dragged a screaming woman from her car after she refused to show her ID at a coronavirus checkpoint.

Wallan woman Natalie Bonnet posted a video to social media over the weekend, filmed at a checkpoint around 6pm on Saturday in Kalkallo, in Melbourne’s north.

Footage shows a police officer explaining to the 29-year-old that her mobile phone charging device was obstructing her view on the dash board, and was an offence.

After arguing with the officer over the phone charger, which she claimed was “sold everywhere”, she refused to give him her name and address.

“Will you get out of the car please?” the officer can be heard saying.

“You’re safe, don’t you worry about that,” the officer says, before opening the car door and dragging her screaming out of the driver’s seat.

In a Facebook post describing the event, Ms Bonnet said: “I am shaking and my blood is boiling”.

“They called for backup and had four police officers grab me by the legs and pull me out of my car and arrest me,” she said.

“While trying to cuff me they had their knees in my back and couldn’t breathe.”

Victoria Police said “the woman was warned that if she did not provide her details, she would be arrested”.

“She still refused and was asked by police to get out of her car,” ” a police spokesperson said in a statement to The New Daily.

“When she refused this request, she was taken from the car by officers and taken into custody.”

Ms Bonnet was later released and is expected to be charged on summons with a number of offences, including failure to produce licence, resisting arrest and assaulting police.

A 33-year-old woman has become the first person in Western Australia to be fitted with an electronic monitoring bracelet for allegedly breaching strict quarantine rules.

WA Police Commissioner Chris Dawson made the order and the device was fitted to the woman on Friday night.

Police said the woman arrived in WA from New South Wales on September 1, and was directed to self-isolate at her home in Perth for 14 days’ quarantine.

But when officers from the Self Quarantine Assurance Team knocked on her door during a routine check on Thursday, they found two men visiting the woman at her house.

The woman was slapped with a $1000 fine and was moved to a Perth quarantine hotel.

Police said they attached a monitoring device to her ankle, given the circumstances of the breach and her “previous history”.

The bracelet will remain in place until the end of the woman’s quarantine period.

The post Police arrest dozens of protesters on eve of Victoria’s lockdown easing appeared first on The New Daily.