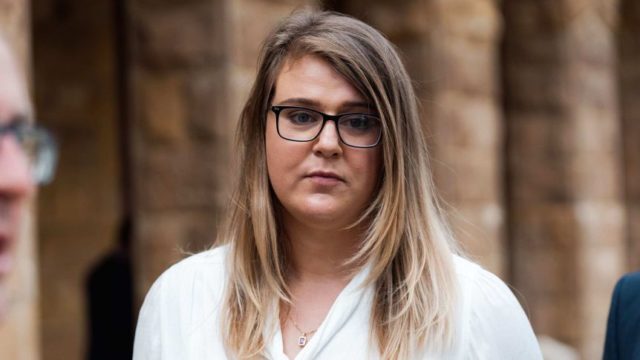 A 28-year-old Perth woman who received a precedent-setting jail term for breaching WA’s strict COVID-19 quarantine laws has won an appeal against her prison sentence and has instead been given a community service order.

Asher Vander Sanden, 28, was originally sentenced to six months’ jail after admitting sneaking across WA’s hard border hidden inside a car being transported by a truck.

She had come from coronavirus-hit Victoria, where she had been visiting her sister.

But in handing down her decision on Tuesday, Justice Jenni Hill took into account that Vander Sanden had already spent three weeks in custody and ruled she should receive a community-based order.

Vander Sanden will have to undertake 50 hours of community service work.

While she did have permission to fly into WA and quarantine at a hotel at her own expense, she instead hitched a ride with a truck driver she met at a roadhouse in Mildura.

Her boyfriend picked her up at a petrol station in Midland, and she spent the next 10 days with him at a unit in Scarborough.

She knew police were looking for her, but she did not let them know where she was.

Vander Sanden was arrested and spent three weeks in custody before her case was dealt with by the Perth Magistrates Court.

However, she was released on bail within days of being sentenced, after lodging an appeal in the Supreme Court.

Justice Jenni Hill listed it for an urgent hearing, noting that because of the number of similar cases coming before the courts, the sentencing authorities should receive “some assistance” from the Supreme Court.

The appeal was heard last week, and Vander Sanden was required to attend but she made no comment as she entered and left the court.

Her barrister, Simon Watters, argued the magistrate had failed to adequately consider whether the jail term could have been suspended.

He submitted Vander Sanden’s crime was at the “mid-level” range of seriousness, saying she had not “gone out and about” when she got back to Perth and had self-quarantined in the Scarborough unit.

Mr Watters highlighted other cases where offenders had got a lighter penalty, including a man who used a ladder to get in and out of his quarantine hotel, and a woman who visited a playground and went to an 80th birthday party, when she was meant to remain at her home.

Justice Hill ruled the decision to jail Vander Sanden was “plainly unjust and unreasonable”, saying she found it “difficult to understand how a sentence of immediate imprisonment could have been reached”.

She said given Vander Sanden’s guilty plea, her personal circumstances, her remorse and the time she had already served, a community-based order was the appropriate penalty.

That means she has to be supervised by a community corrections officer and obey any direction from them.

Vander Sanden made no comment as she left court, but her lawyer Robert Jamieson said she was relieved she did not have to go back to prison.

Mr Jamieson said the decision might have some implications for other cases of quarantine breaches that come before the courts.

“As the judge said, this doesn’t set the bar exactly for people that commit this kind of offence, but it is a decision of a superior court.”

The post Quarantine dodger freed from jail after winning appeal appeared first on The New Daily.