Documents obtained by InDaily show the church is seeking up to $35 million from the state and federal governments to pay for the public infrastructure works, including $15 million for the restoration and $20 million for the visitor centre and plaza.

The remaining $65 million will be spent by the Diocese to create an annuity to maintain the cathedral.

The Anglican Church has also asked the State Government to spend an undisclosed sum to extend the north-south tramline into North Adelaide to create a new “cathedral line” connecting St Peter’s Cathedral to Victoria Square, where Colonel William Light originally intended the church to be built in the 1800s. 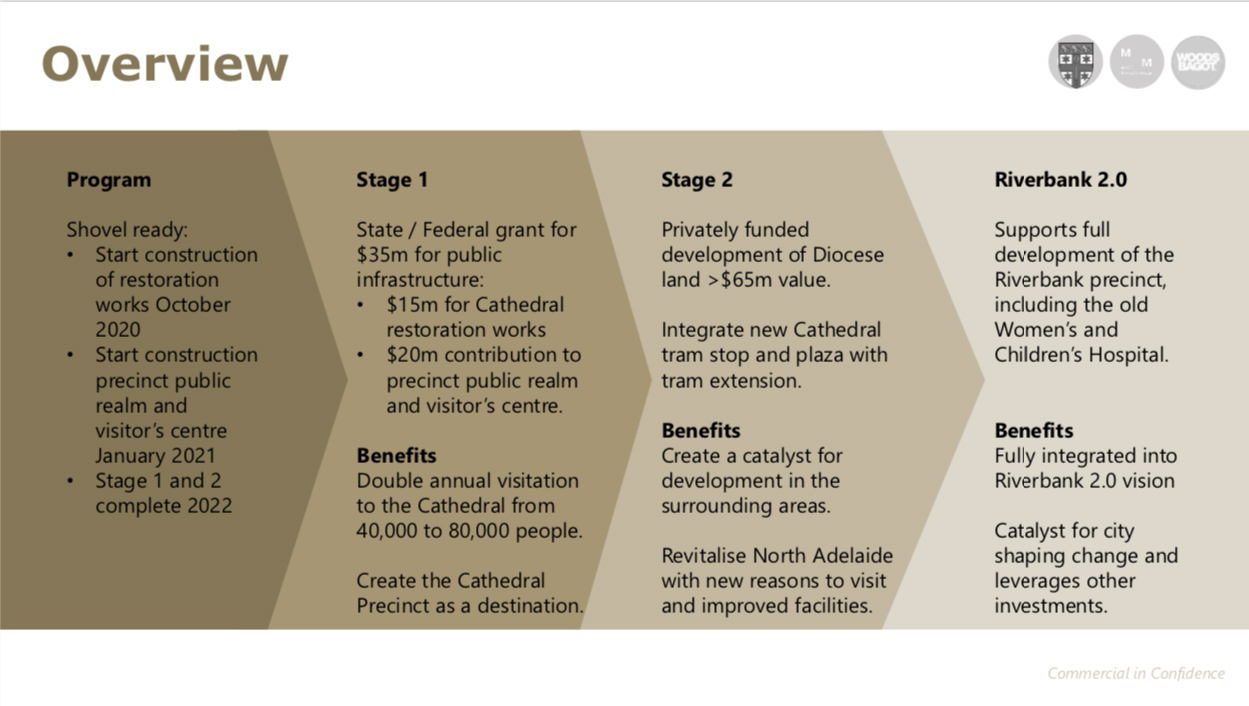 An Anglican Diocese of Adelaide document outlining its funding request to the state and federal governments.

The extended line would feature three new stops extending from the Festival Plaza stop: one directly in front of St Peter’s Cathedral, a second near the old Le Cornu site at 88 O’Connell Street and the third near the Piccadilly Cinema.

According to the plan, other future developments, including a proposed new Aquatic Centre in the park lands, would also benefit from a tramline extension into North Adelaide.

It follows a $259 million Labor pledge ahead of the 2018 election to extend the tramline two-kilometres along O’Connell Street into North Adelaide as part of its proposed “ProspectLink” extension – a plan that has been shelved by the Marshall Liberal Government until at least after the next poll in 2022.

According to the undated plan, the restoration works were scheduled to start as early as next month, with construction on the public realm and visitor centre due to begin in January. 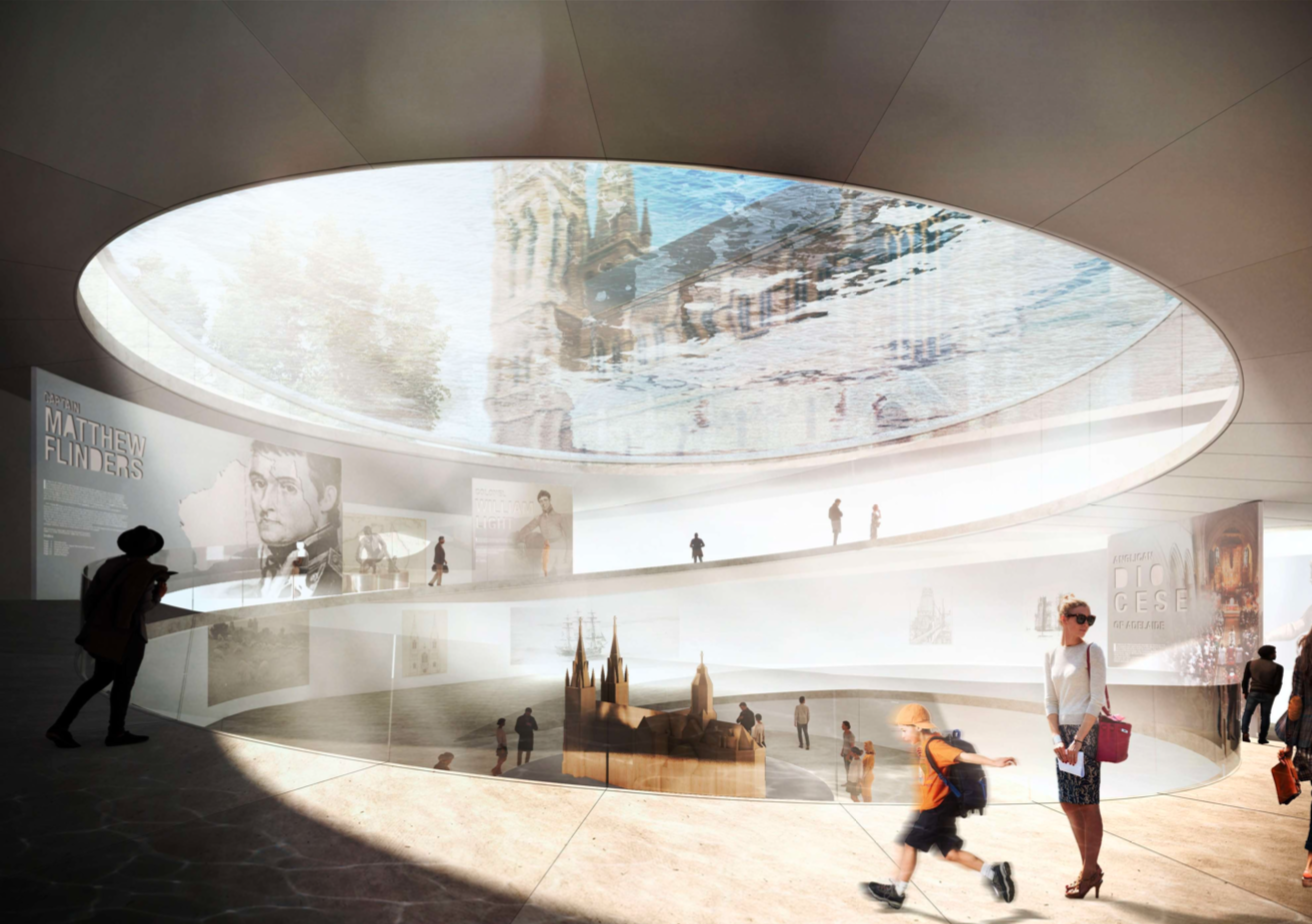 The Anglican Diocese of Adelaide and St Peters Cathedral commissioned UK consultancy firm Mott MacDonald, which was involved in the Torrens to Torrens project and Adelaide Oval redevelopment, and Melbourne-based architects Woods Bagot, which worked on the Adelaide Convention Centre redevelopment, to come up with the plan.

It states the redevelopment would transform the cathedral precinct into a “destination” and double annual visitation from 40,000 to 80,000 people.

According to the church, the proposed redevelopment has the potential to create a “catalyst for development in the surrounding areas” and increase the residential population in North Adelaide. 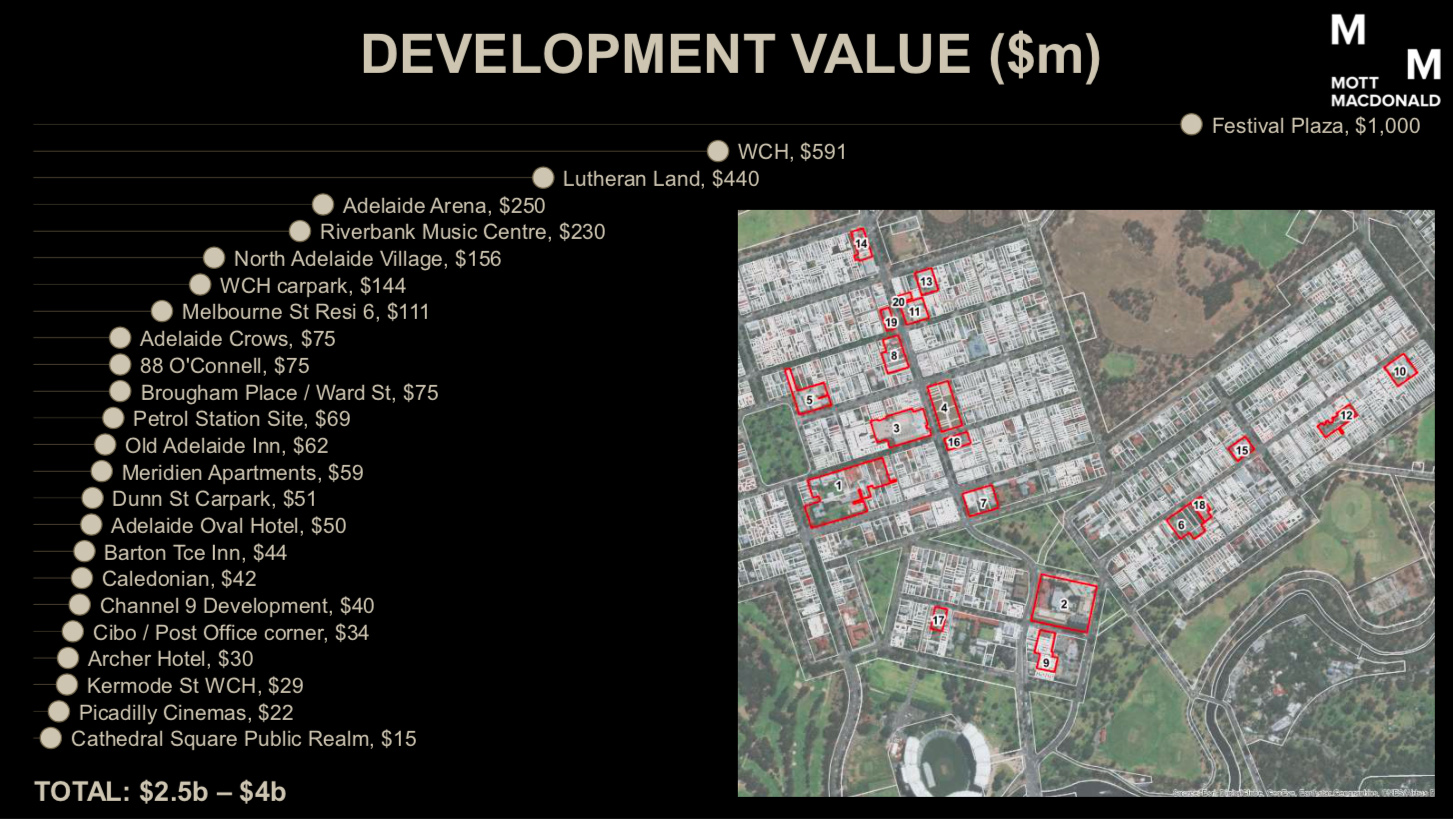 A vision statement declares the redevelopment would create an “ongoing revenue stream” for the cathedral and “enhance the prominence and accessibility of St Peter’s Cathedral within our city”.

The designs show the redeveloped cathedral would complement a yet-to-be-announced new development at the current Women’s and Children’s Hospital site, once the public hospital is relocated from North Adelaide to the city’s west.

It would also “enhance Adelaide’s culture of music” by aligning with the University of Adelaide’s Conservatorium of Music, as well as the State Government’s proposed new acoustic concert hall, which is yet to be funded.

A raft of church redevelopments interstate and overseas are mentioned as “benchmark” examples for the proposed St Peter’s Cathedral works, including Bishop’s See in Perth, Aspire Precinct in Bendigo, Project Pilgrim at Gloucester Cathedral and Cathedral Place in Philadelphia.

A tramline extension into North Adelaide would help link the cathedral to what the designers have named “Riverbank 2.0”, featuring new developments including the proposed concert hall, an unannounced glass building floating on the Torrens called “Elder Jewel” and a new sports arena on Memorial Drive – a project that the Government has since shelved. 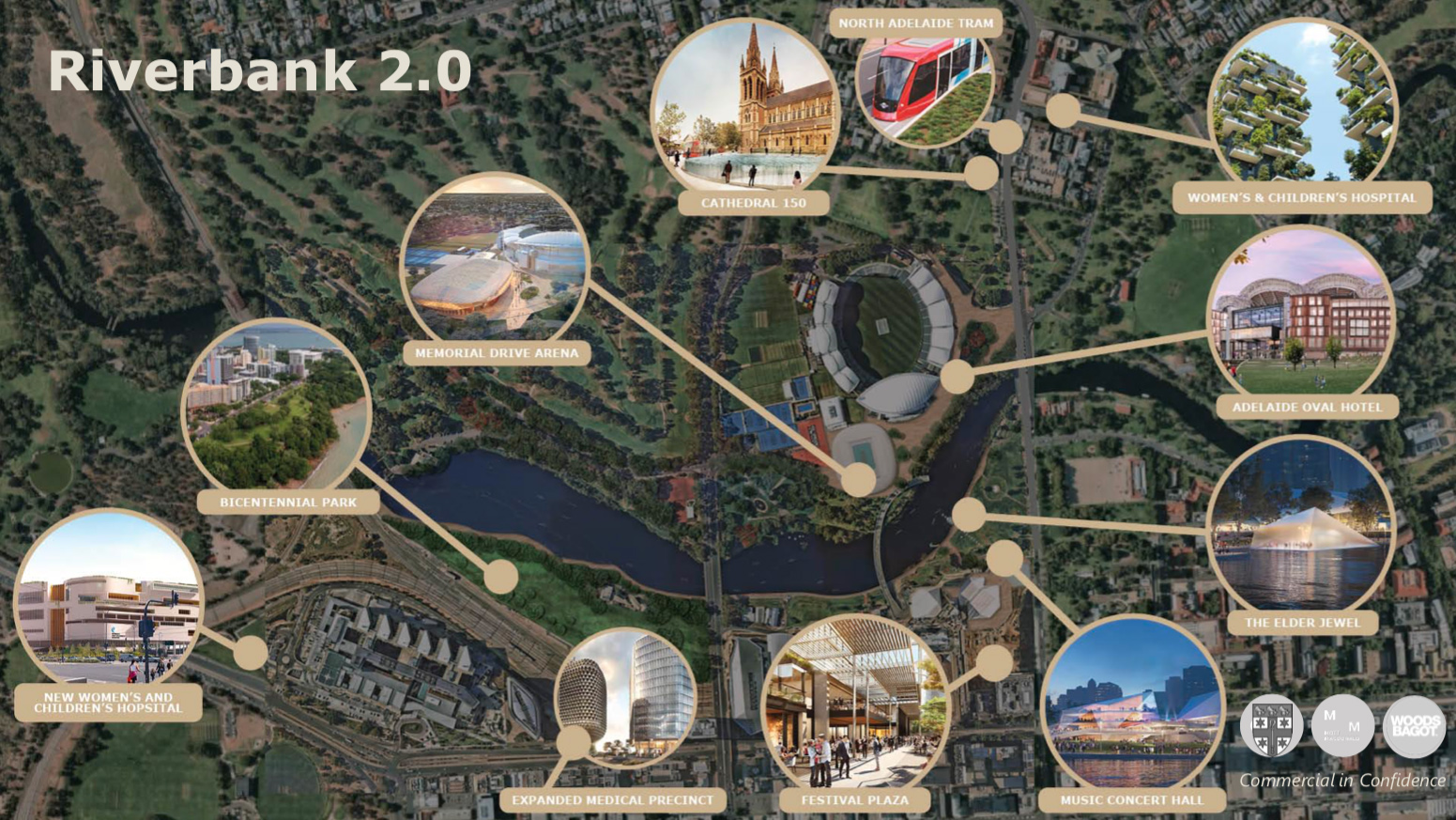 According to the master plan documents, Premier Steven Marshall and former Planning Minister Stephan Knoll have been briefed on the plans, as well as South Australian Liberal senator David Fawcett and ex-independent senator Cory Bernardi.

InDaily asked Marshall’s office if the State Government was considering funding the project, but a spokesperson referred the enquiry to Planning Minister Vickie Chapman, who is yet to respond.

Treasurer Rob Lucas said a broad proposal had been raised and rejected a year ago but he had not seen the detailed plans since then.

“As with all proposals, the Government will consider it but my personal view is it would have to be a fairly high threshold to be putting $35 million into a cathedral,” he said.

“We may have similar arguments for other principal places of worship for other religions as well [so] we’d obviously cast the eye on what the ongoing public benefit would be for any such proposal.

“If it’s submitted, it will be given due consideration.”

Federal Infrastructure Minister Michael McCormack is yet to respond to InDaily‘s request for comment.

The church has briefed a raft of major organisations including the Adelaide Oval’s Stadium Management Authority, the Adelaide Football Club, Adelaide Festival Centre, the University of Adelaide, Business SA and Adelaide Symphony Orchestra.

It also intends to launch an expression of interest process to secure potential development partners.

The Adelaide City Council is not mentioned in the documents. 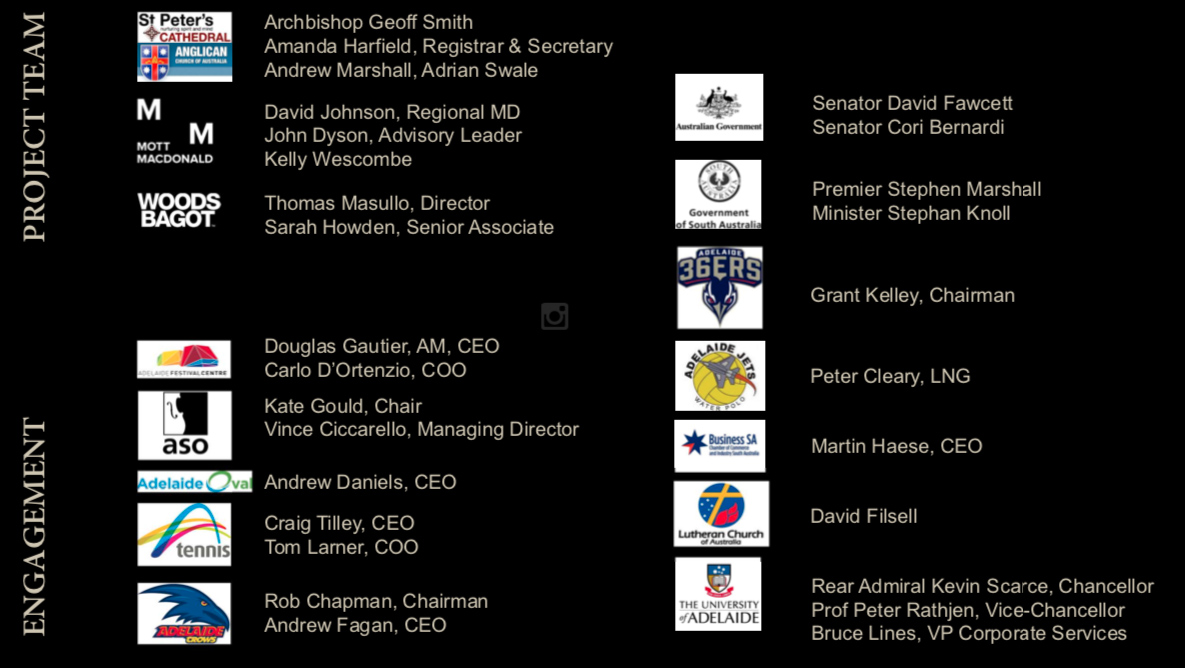 InDaily contacted the Anglican Diocese of Adelaide for comment but it yet to receive a response.

The Anglican Diocese of Adelaide earlier this week announced that it had sold its 164-year-old mansion Bishop’s Court at Palmer Place for an undisclosed sum.

The 5300 square-metre property, which sits on prime land overlooking Palmer Gardens, hit the market in February and was expected to fetch more than $10 million – making it the most expensive residential property in SA.

Archbishop Geoff Smith was the most recent resident, having lived at the estate for the past three years with his wife.

Help our journalists uncover the facts

In times like these InDaily provides valuable, local independent journalism in South Australia. As a news organisation it offers an alternative to The Advertiser, a different voice and a closer look at what is happening in our city and state for free. Any contribution to help fund our work is appreciated. Please click below to donate to InDaily.