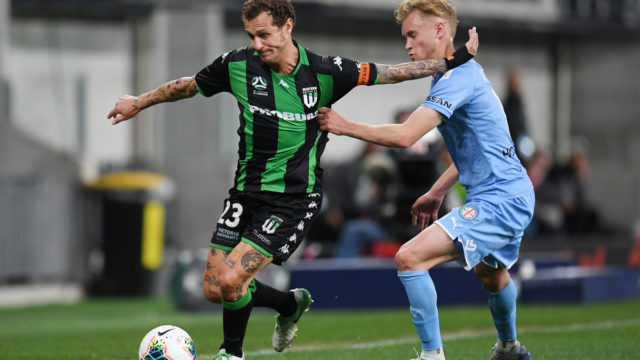 Western United star Alessandro Diamanti has capped off a stellar first season in the A-League, winning the Johnny Warren Medal as player of the year.

Perth’s Diego Castro, who won in 2015-16, and Wellington’s Mexican attacker Ulises Davila rounded out the top five with 23 points apiece.

Diamanti, 37, was a marquee signing for United and was named captain ahead of the club’s inaugural A-League season.

Wow !!!!
I have no words to express how honoured I am in receiving such a special award. It has been a crazy year for all of us . Thanks everyone that made this happened! It has been incredible and I’m overwhelmed ! 🙏❤️

The charismatic Italian playmaker scored seven goals and provided a further seven assists across 25 regular-season games, helping United to fifth on the table in their first season.

Diamanti re-signed with United for a further two seasons in July.

Former Melbourne City coach Erick Mombaerts was named coach of the year after leading City to second on the table and a maiden grand final.

McGree, 21, is expected to secure a second move to Europe, having previously had a stint at Belgian outfit Club Brugge.

Sydney FC shot-stopper Andrew Redmayne was named goalkeeper of the year while Newcastle Jets veteran Nikolai Topor-Stanley won goal of the year for his stunning strike against Perth Glory in round 21.

The Johnny Warren Medal is based on regular-season form, with former NSL and A-League players, the particular game’s match officials, FFA technical staff and members of the media each voting on a 3-2-1 basis on all 143 games.

Those votes are tallied and independently audited, with the player(s) who accrue(s) the most votes named the winner.

Congrats to Erick Mombaerts who has been named the @ALeague Coach of the Year! #DolanWarrenAwards #ALeague pic.twitter.com/IOifezhkri

Referee of the year: Chris Beath