What the Fakfak? World’s rudest places

Not all place names are neutral or nice. I was reminded of this travel fact earlier in the year on a yacht expedition off West Papua, where passengers and crew spent several days sniggering our way along the Fakfak Peninsula, which lies at the base of the Fakfak Mountains on the island of New Guinea.

It’s also known as the Bomberai Peninsula but no one on-board ever used that name. Where’s the fun in that? The A in Fakfak is long rather than short – more like a U, really – so it sounds like swearing.

I never tired of asking local fisherman where they came from so I could hear them say The Bad Words. Even our guest historian got in on the joke, endlessly praising the delights of Fakfak.

I used to think Lake Titicaca in Peru/Bolivia sounded amusing too, until I went there and learned from Quechua people that, in their language, its name means “Mount of the Puma”. Not quite as hilarious. The floating island of Uros on Lake Titicaca, Peru.

Some rude place names are accidental; others are just boldly descriptive. Venice’s Ponte delle Tette, or Bridge of the Boobs, marks the entrance to the port city’s former red light district where 1000 prostitutes once plied their trade.

The equivalent in English towns was Gropec–t Lane, also a reference to the prostitutes who once worked there. Derbyshire’s Spanker Lane might have related origins.

Travel is a rite of passage for every young person but perhaps never more so than on a roadtrip through Bavaria via Petting, Kissing and Wank Mountain before arriving at F—ing, just over the border in Austria. If planning on taking this route it’s wise to make a pit stop first in France, for Condom.

Travellers can be forgiven for being distracted by all the Bums and Diks in Africa. Afghanistan has several Bums; Ukraine has an Ass. The journey between Algeria’s two Tits.

Canada also has a Crotch Lake in Ontario and a Shag Harbour in Nova Scotia but, for me, nothing quite compares to the stark terror of Head-Smashed-In Buffalo Jump in the Rocky Mountains.

There’s an Effin in Limerick, Ireland – Let’s go to the Effin pub! Where’s the Effin hotel? – but even more entertainment to be had in the Shetland Islands at White Stane of Willies, Junk and Twatt. (I am not making any of this up.)

The small settlement of Vilapene in Galicia, Spain, translates to Penisville. There’s a town called Rectum in The Netherlands, located about 130km east of Amsterdam. It’s funniest if you Google it because the top hits range from “Best Rectum Hotels” (thanks hotels.com) to a “Rectum Destination Guide”. 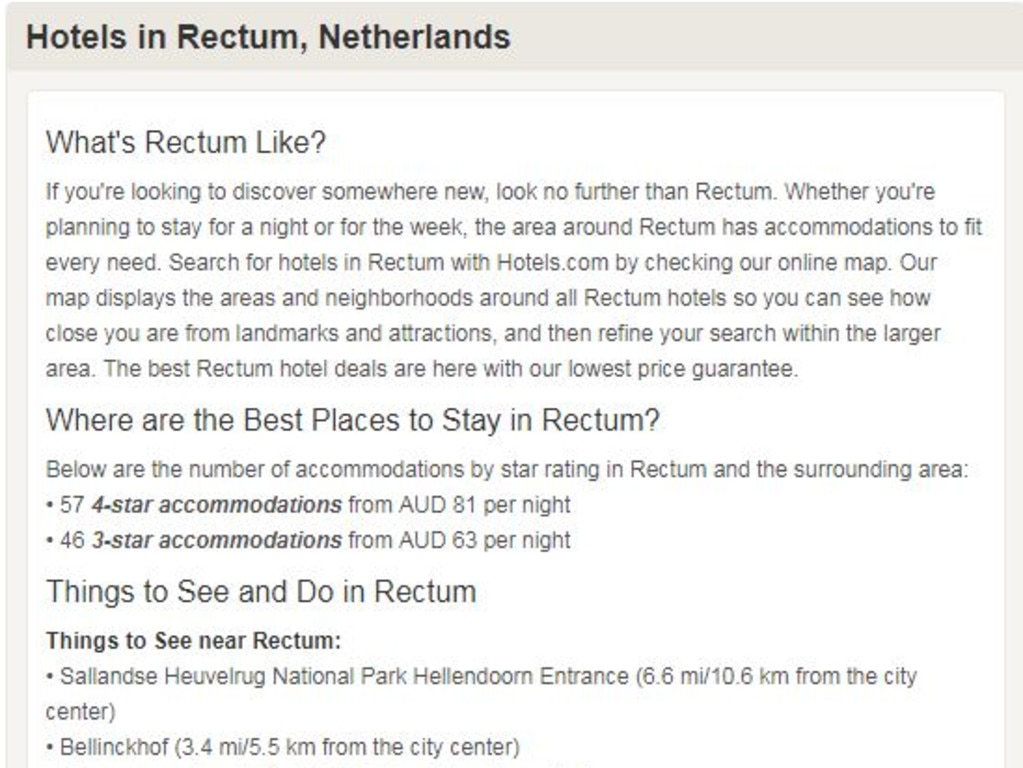 Hotels.com’s inside guide to Rectum.

Suggestive place names are found all over the planet – from Mexico, where there’s a Poop in southeastern Yucatan state, to Crap in Albania and the Anuses of the Philippines, Indonesia and France.

And while it’s all very well to giggle at Intercourse, Pennsylvania, it’s worth remembering Australia has an Intercourse Island – located in the Dampier Archipelago off the north coast of WA.

The Australian fondness for blunt and bawdy language might explain why there are so many knobs (rocky outcrops) strewn across the continent. My favourite is Yorkeys Knob in far north Queensland, just outside Cairns on the road to Port Douglas, not so much for the name as the views and brews from its hilltop boat club. Elsewhere in Australia there’s a Peculiar Knob, a Six Mile Knob, a Prominent Knob and a Delicate Nobby. Tasmania has a Misery Knob and a Pisspot Creek but these are anomalies on an island better known for being Snug, Paradise and Nowhere Else.

And I suspect Victoria’s Tittybong (population three) and Burrumbuttock in NSW sound less droll in their original Indigenous languages than they do in English.

That’s the problem with English. It’s a language so rich in innuendo that funny-sounding foreign (and local) places don’t stand a chance of being taken seriously. When I lived in Sydney I couldn’t quite believe there were suburbs called Rooty Hill, Pleasure Point and Bobbin Head but the locals seemed unfazed so I kept my smut to myself.

It’s best that way, wherever you find yourself in the world.

As the Albanians probably say, one person’s Crap is another person’s treasure.

But sometimes, thankfully, even the locals are in on the joke.

A viral video from mid-2018 showed politicians in Ghana wetting themselves as the names of several obscure towns were read out in parliament.

Those towns were Kote ye Aboa (Penis is a Fool), Etwe nim Nyansa (Vagina is Wise) and Shua ye Morbor (Testicles are Sad).

Proving, yet again, that we are all children at heart.